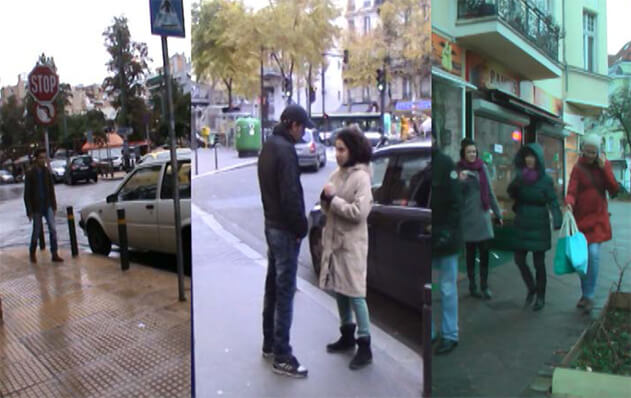 The triptych video documentation of the performance « La fête », shows the attempt of three artists to provoke random encounters in the urban landscape, through an invitation to visit the artist’s house. Three artists realise the same action in three different cities: Paris, Athens and Berlin. Each one of them hails the passengers in a street close to his apartment and invites them to a gathering in his place where a party with his friends is taking place. Their goal is to create un unfamiliar situation, between strangers that are invited to co-exist in an equally unfamiliar place. The action is videotaped while the artist is inviting the strangers to his home, however when a passenger decides to come to the gathering he has the right to choose whether he wants to be recorded or not.

This sort of artistic practice aims to re-examine the social reality through an alternative lens and it appears to be a breach with the daily routine. The « irritation » of the passengers tends to provoke situations that challenge what we understand as human communication, free time and the importance of public space in urban metropolises. The actions described in this video wish to appear as a resistance against the political inactivation of the arts, while realising their inability to provide solutions but rather raise questions. 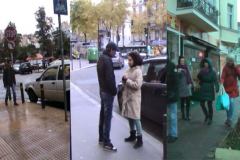